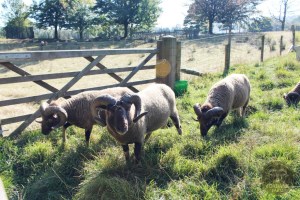 Castlemilk Moorit Sheep have come about as Sir Jock Buchanan-Jardine, the third Baronet, moved into his ancestoral home on the Castlemilk Estate, near Lockerbie on the death of his father in 1927. The baronetcy that Sir Jock had succeeded to was created in 1885 for Robert Jardine, a liberal politician and head of the trading house Jardine Matheson.

It was during the early part of the twentieth century that the late Sir Jock Buchanan-Jardine began a programme to develop a breed that would befit his fine country estate. The breed came into being after many years of careful breeding and combines elements of three primitive breeds,the Manx Loaghtan, the Shetland and the wild Mouflon. 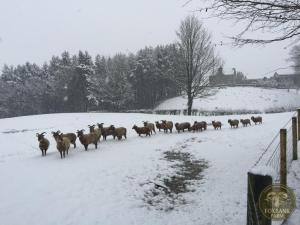 Sir Jock was keen to develop a breed that would not only beautify his estate, but that would also produce high quality meat and wool. His intention being not only to enjoy the lamb himself, but also to feed and clothe the estate staff. To say that he succeeded would be to somewhat understate his success. The quality of Castlemilk Moorit Sheep meat is unsurpassed both in terms of flavour and texture. It is exceptionally lean and fine grained, winning plaudits from all who taste it. In addition the fleece derived from the sheep is a beautiful rich brown or Moorit colour and benefits from having almost no kemp whatsoever, making it perfect for hand spinners seeking a high quality raw wool. 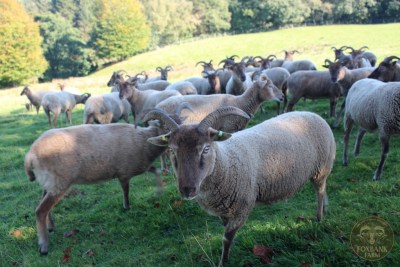 The breed was unique to the Castlmilk Estate and was very much part of Sir Jock’s legacy. Sadly, it’s existence was little known about or appreciated and upon the death of Sir Jock in 1970 the breed very nearly vanished altogether. The home was sold along with the sheep. The vast majority of the flock was culled however a few examples were dispersed to new owners. Among these were six ewes and a ram that were bought by Joe Henson at the Cotswold Farm Park. Joe has been an inspirational leader in saving Britains rare agricultural breeds, and had it not been for his decision to purchase those seven sheep, the breed would surely have been lost. All today’s surviving sheep are direct descendants of those few dispersed examples that survived the 1970 cull.

We are currently accepting orders for our exceptional and rarely available Castlemilk Moorit Mutton and Hogget.

We have a limited availability of mature animals at the optimum growth point ready for our discerning gastronomes!

Animals are ethically dispatched, hung, jointed and boxed ready for collection from our abettoir/butchery, Redferns of Buxton.

Don't miss out on this opportunity to stock your freezer ready for the autumnal chill. Winter Is Coming !!